Memthol is a visualizer and analyzer for program profiling. It works on memory dumps containing information about the size and (de)allocation date of part of the allocations performed by some execution of a program.

For information regarding building memthol, features, browser compatibility… refer to the memthol github repository. *Please note that Memthol, as a side project, is a work in progress that remains in beta status for now. * 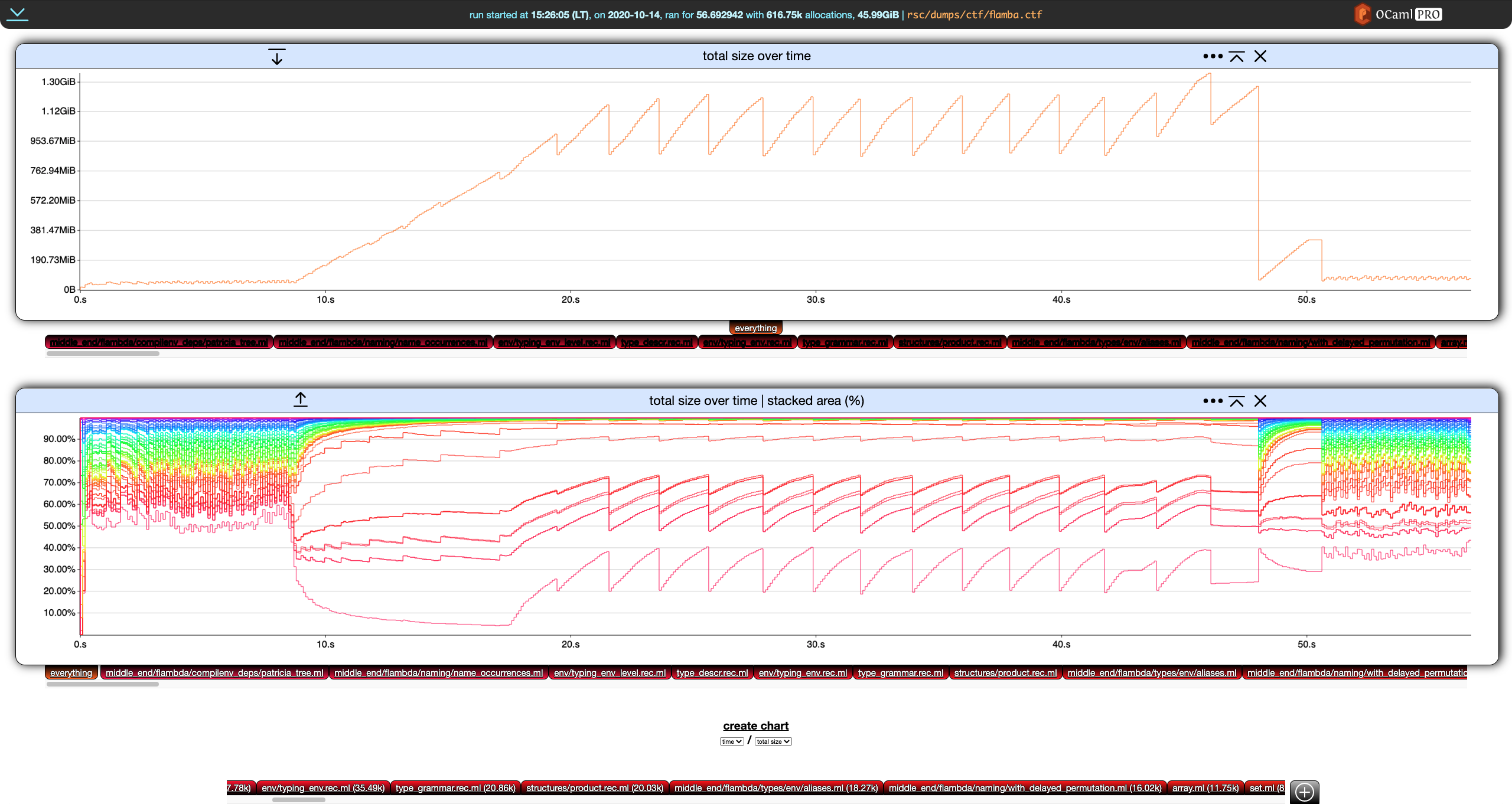 The Memthol work was started more than a year ago (we had published a short introductory paper at the JFLA2020). The whole idea was to use the previous work originally achieved on ocp-memprof, and look for some extra funding to achieve a usable and industrial version.Then came the excellent memtrace profiler by Jane Street's team (congrats!)Memthol is a self-funded side project, that we think it still is worth giving to the OCaml community. Its approach is valuable, and can be complementary. It is released under the free GPL licence v3.

The memtrace format is nicely designed and polished enough to be considered a future standard for other tools.This is why Memthol supports Jane Street's dumper format, instead of our own dumper library's.

Why choose Rust to implement Memthol?

We've been exploring the Rust language for more than a year now.The Memthol work was the opportunity to further explore this state-of-the-art language. We are open to extra funding, to deepen the Memthol work should industrial users be interested.

The following steps are from the Memthol Github howto.

This tutorial deals with the BUI ( Browser User Interface) aspect of the profiling. How the dumps are generated is outside of the scope of this document. Currently, memthol accepts memory dumps produced by [Memtrace](https://blog.janestreet.com/finding-memory-leaks-with-memtrace) (github repository here). A memtrace dump for a program execution is a single Common Trace Format (CTF) file.

This tutorial uses CTF files from the memthol repository. All paths mentioned in the examples are from its root.

Memthol is written in Rust and is composed of

The server contains the client, which it will serve at some address on some port when launched.

Memthol must be given a path to a CTF file generated by memtrace.

Our running example in this section will be rsc/dumps/mini_ae.ctf:

Notice the odd --filter_gen none passed to memthol. Ignore it for now, it will be discussed later in this section.

Once memthol is running, http://localhost:7878/ (here) will lead you to memthol's BUI, which should look something like this: 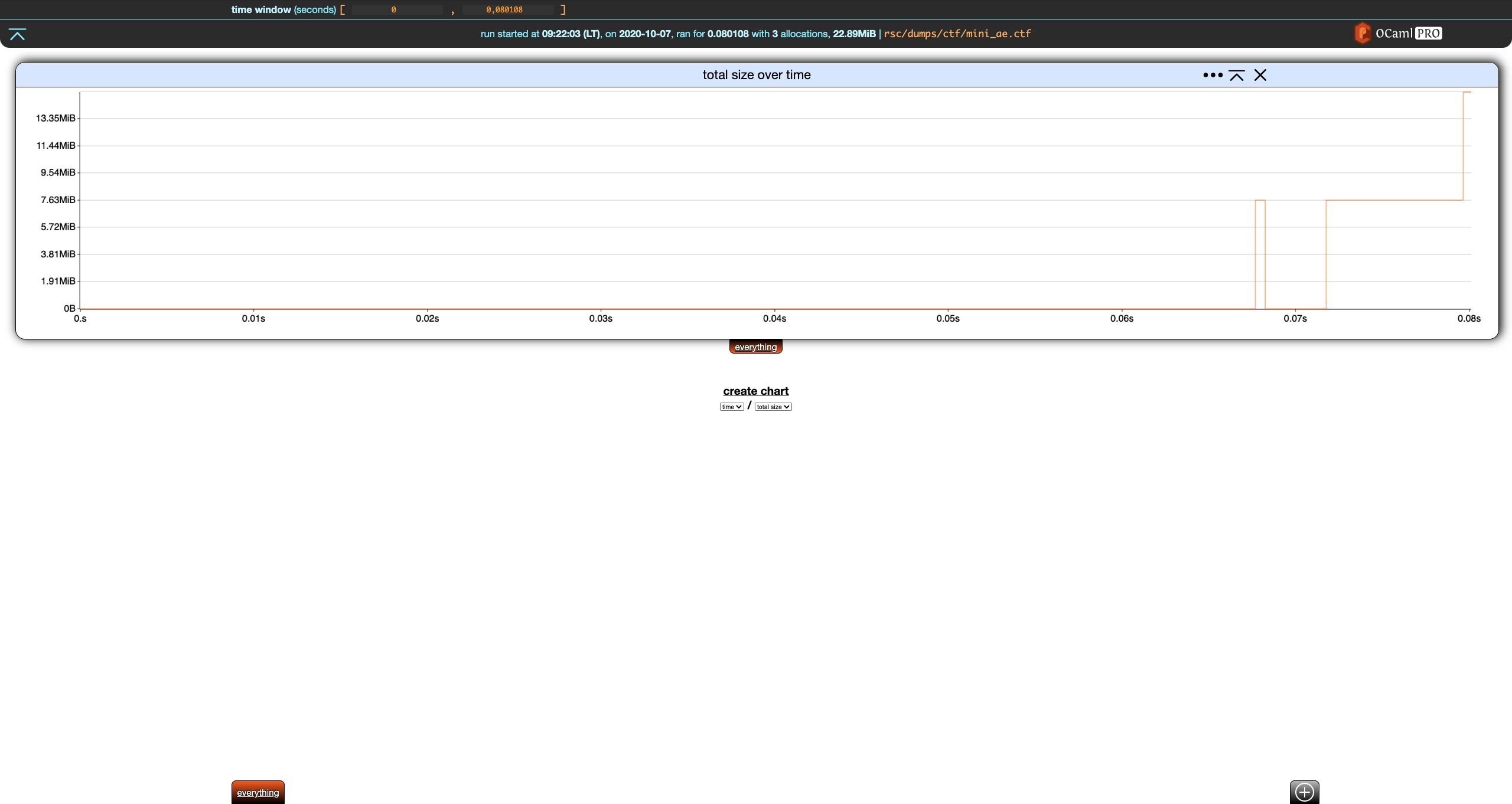 Click on the orange everything tab at the bottom left of the screen. 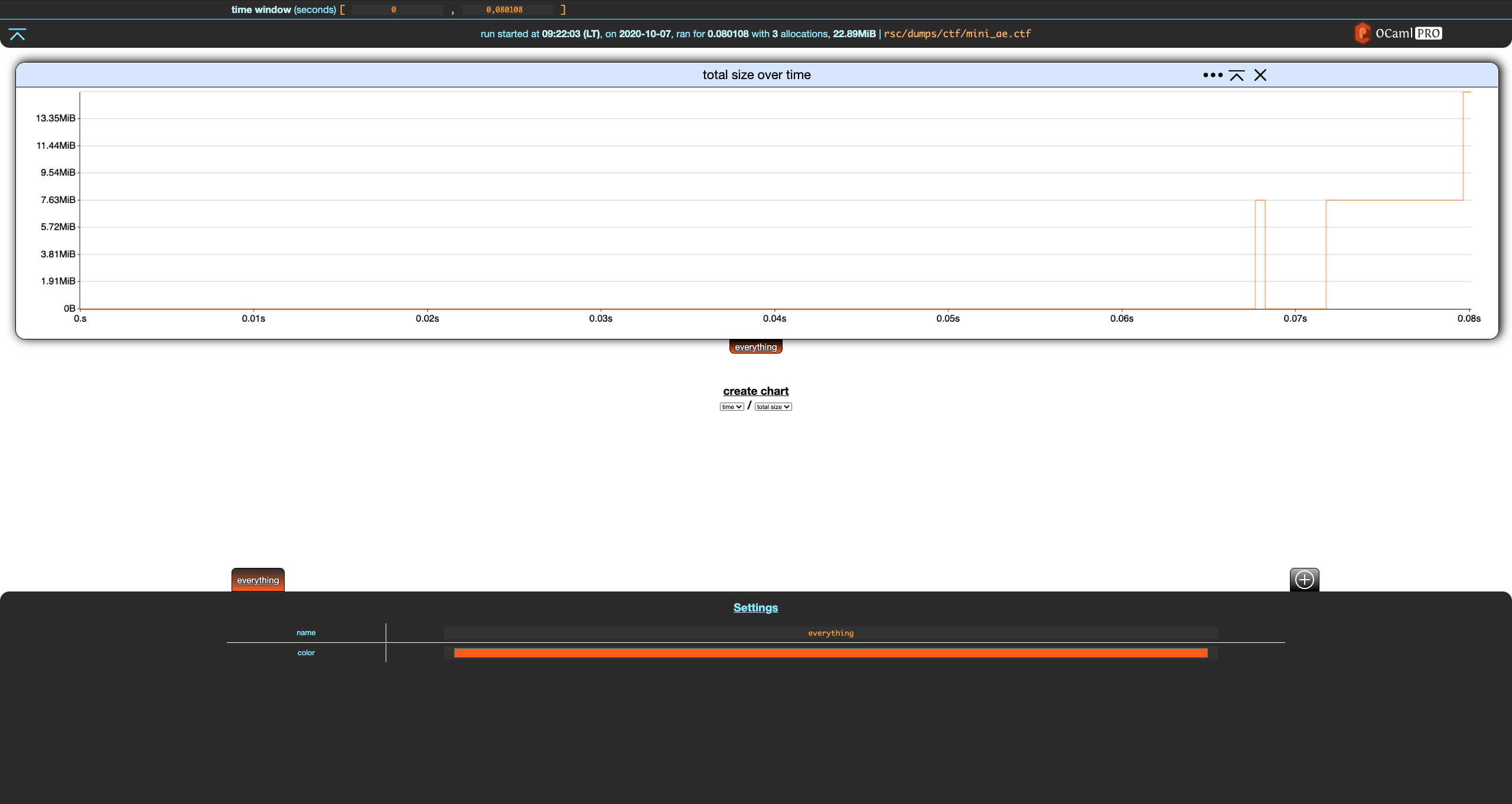 Filters allow to split allocations and display them separately. A filter is essentially a set of allocations. Memthol has two built-in filters. The first one is the everything filter. You cannot really do anything with it except for changing its name and color using the filter settings in the footer. 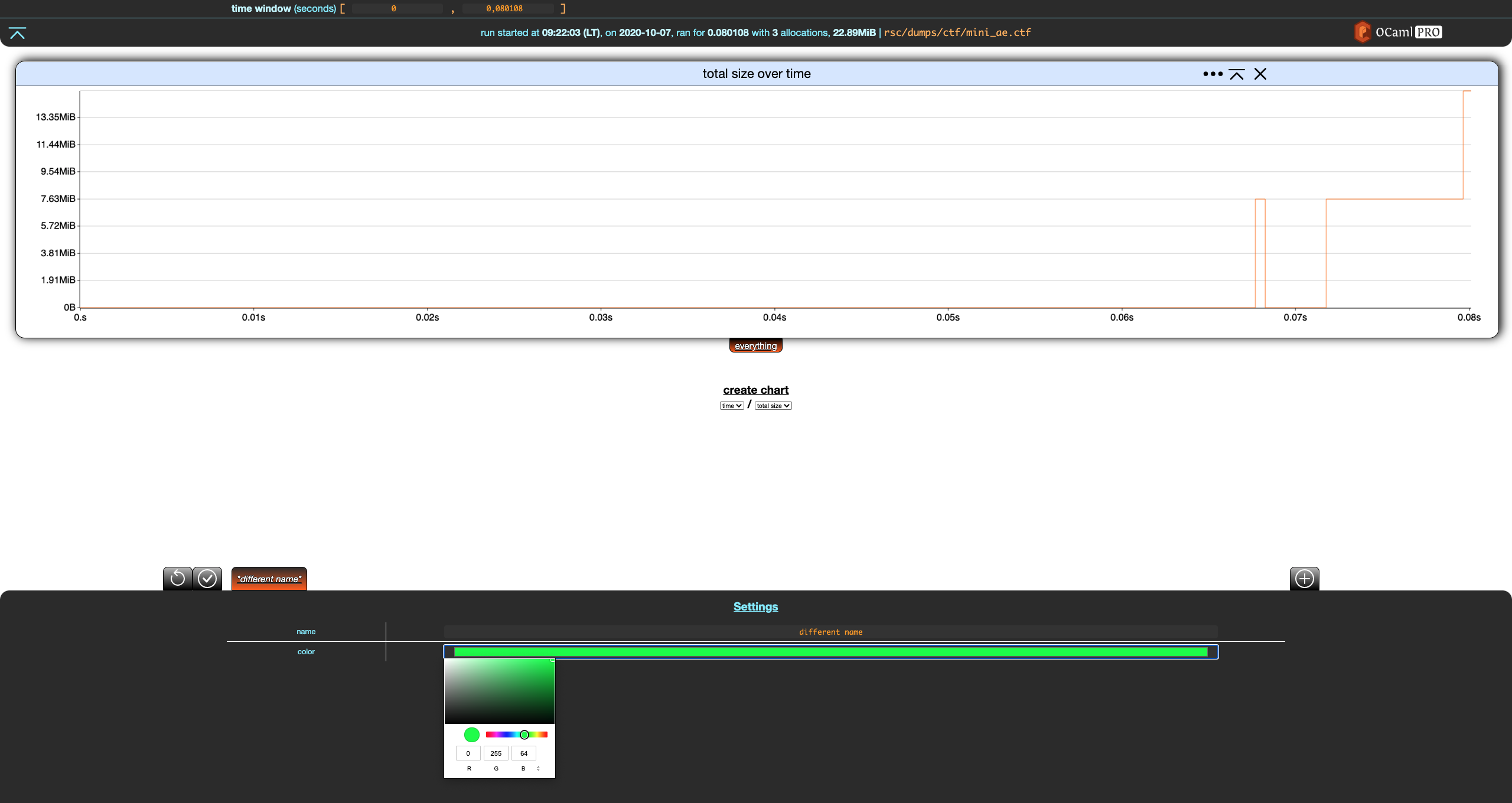 Notice that when a filter is modified, two buttons appear in the top-left part of the footer. The first reverts the changes while the second one saves them. Let's save these changes. 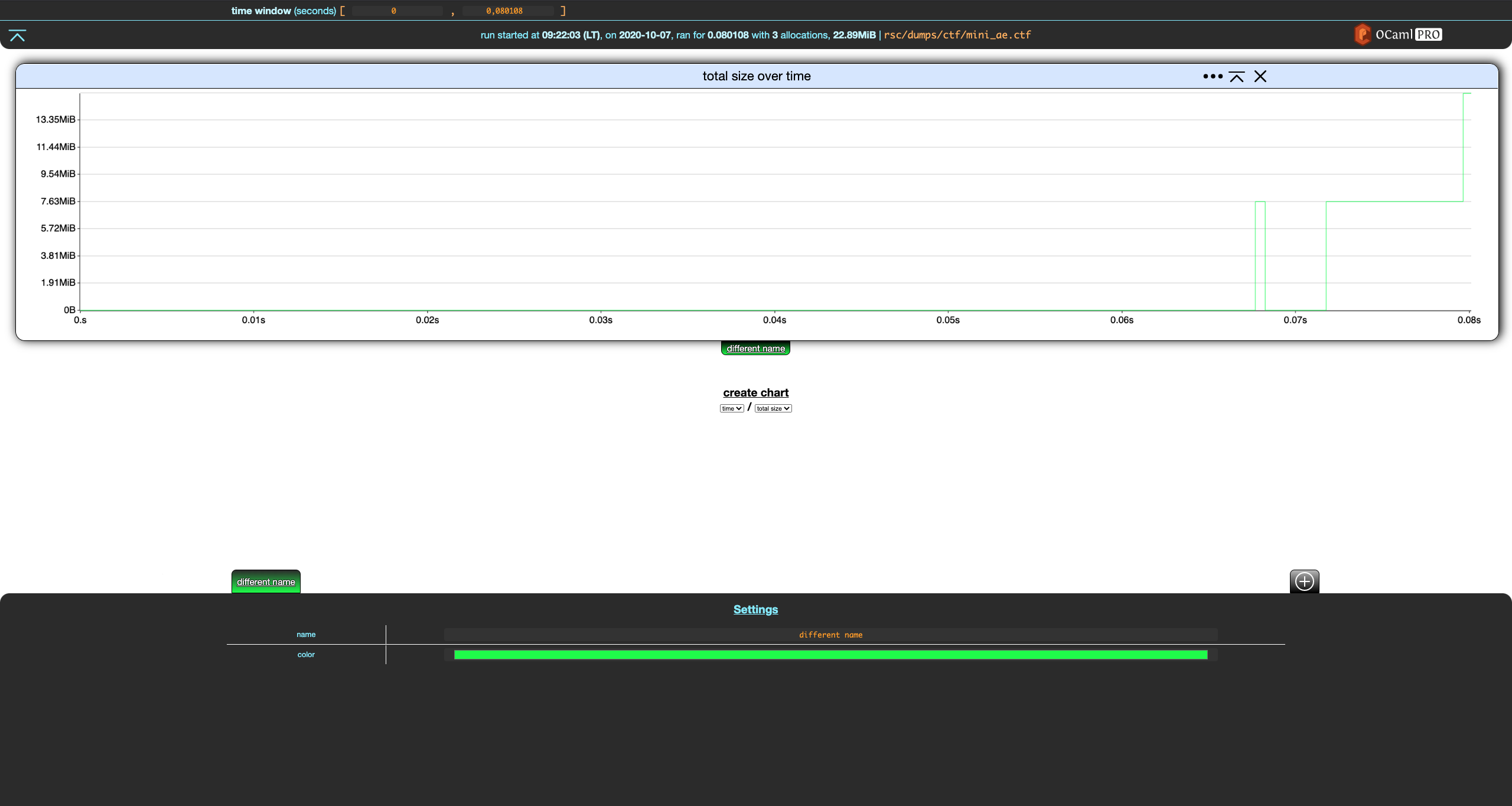 The everything filter always contains all allocations in the memory dump. It cannot be changed besides the cosmetic changes we just did. These changes are reverted in the rest of the section.

Let's create a new filter using the + add button in the top-right part of the footer. 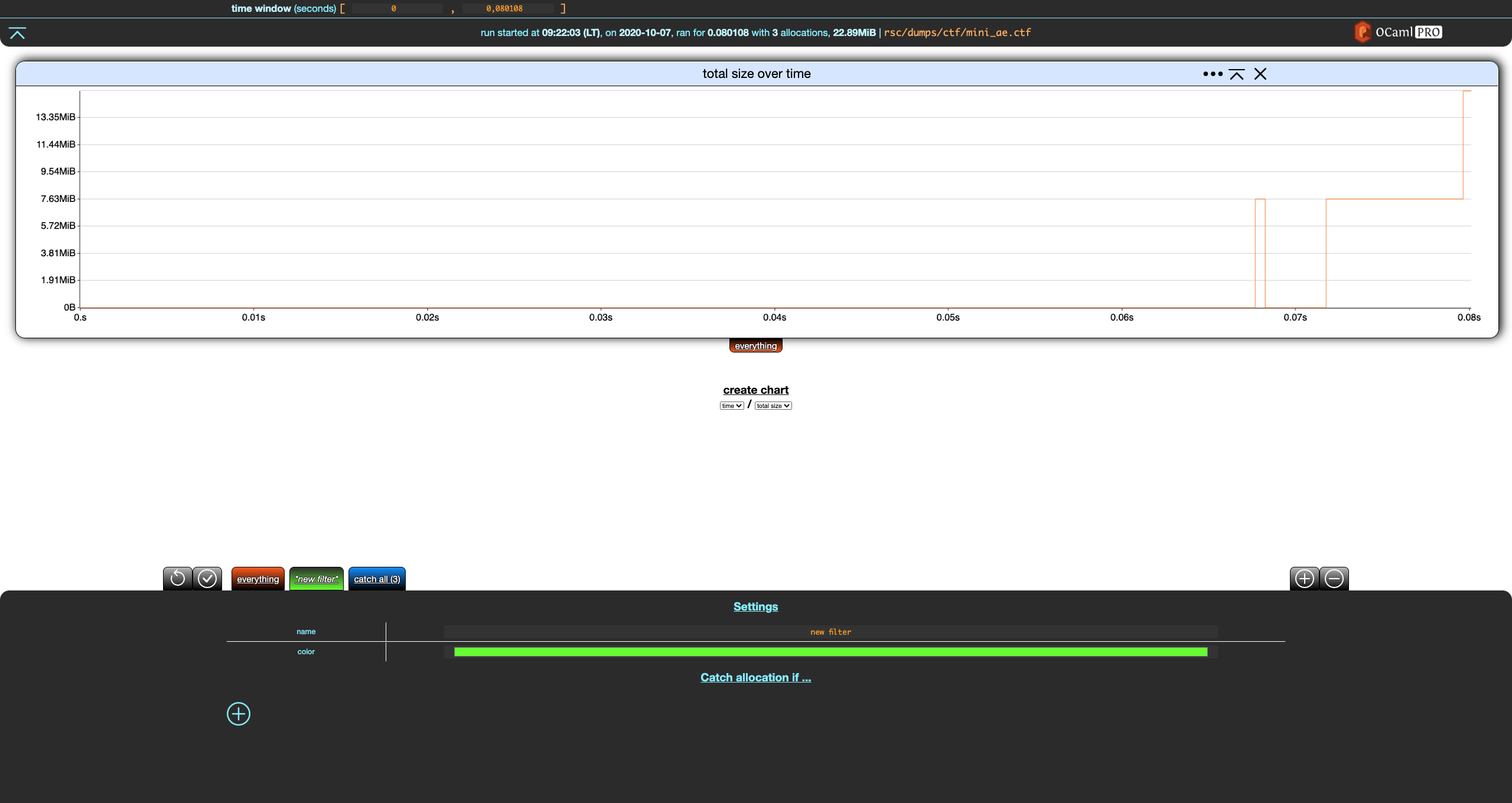 Notice that, unlike everything, the settings for our new filter have a Catch allocation if … (empty) section with a + add button. Let's click on that. 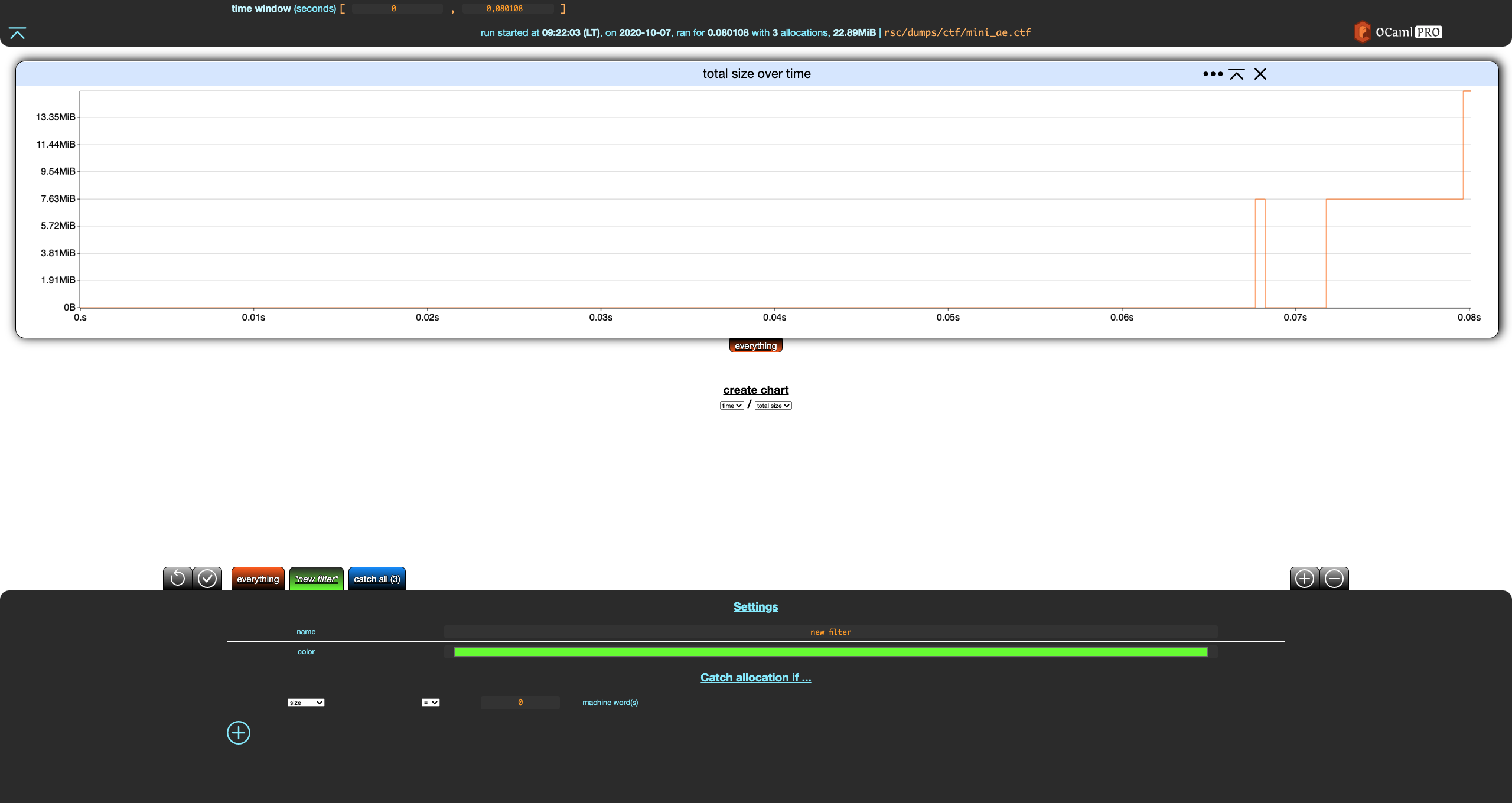 This adds a criterion to our filter. Let's modify it so that the our filter catches everything of size greater than zero machine words, rename the filter, and save these changes. 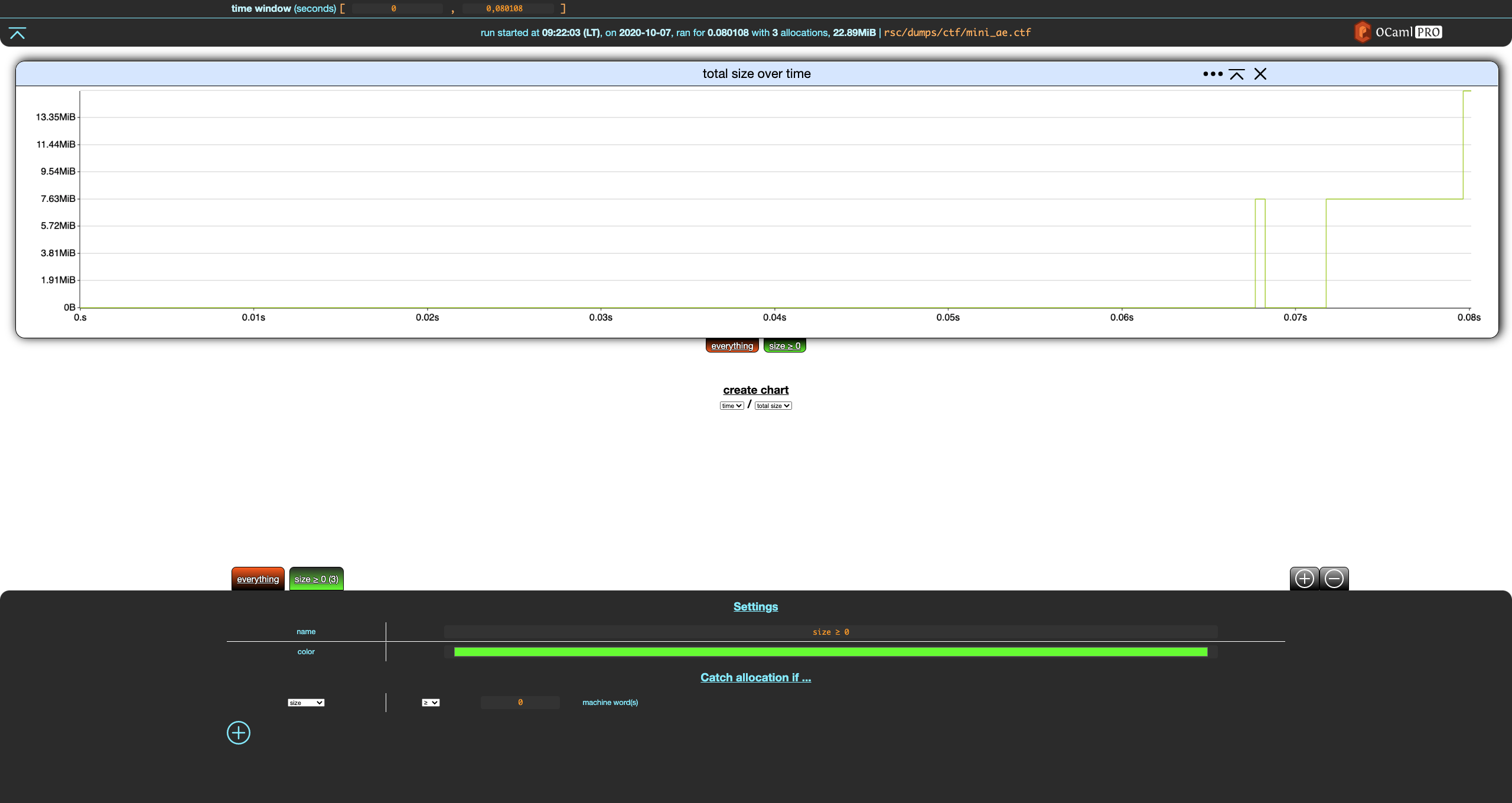 The tab for our filter now shows (3) next to its name, indicating that this filter catches 3 allocations, which is all the allocations of the (tiny) dump.

Now, create a new filter and modify it so that it catches allocations made in file weak.ml. This requires

After saving it, you should get the following.

Sadly, this filter does not match anything, although some allocations fit this filter. This is because a custom filter F “catches" an allocation if

In other words, all allocations go through the list of custom filters from left to right, and are caught by the first filter such that all of its criteria are true for this allocation. As such, it is similar to switch/case and pattern matching.

Let's move our new filter to the left by clicking the left arrow next to it, and save the change. 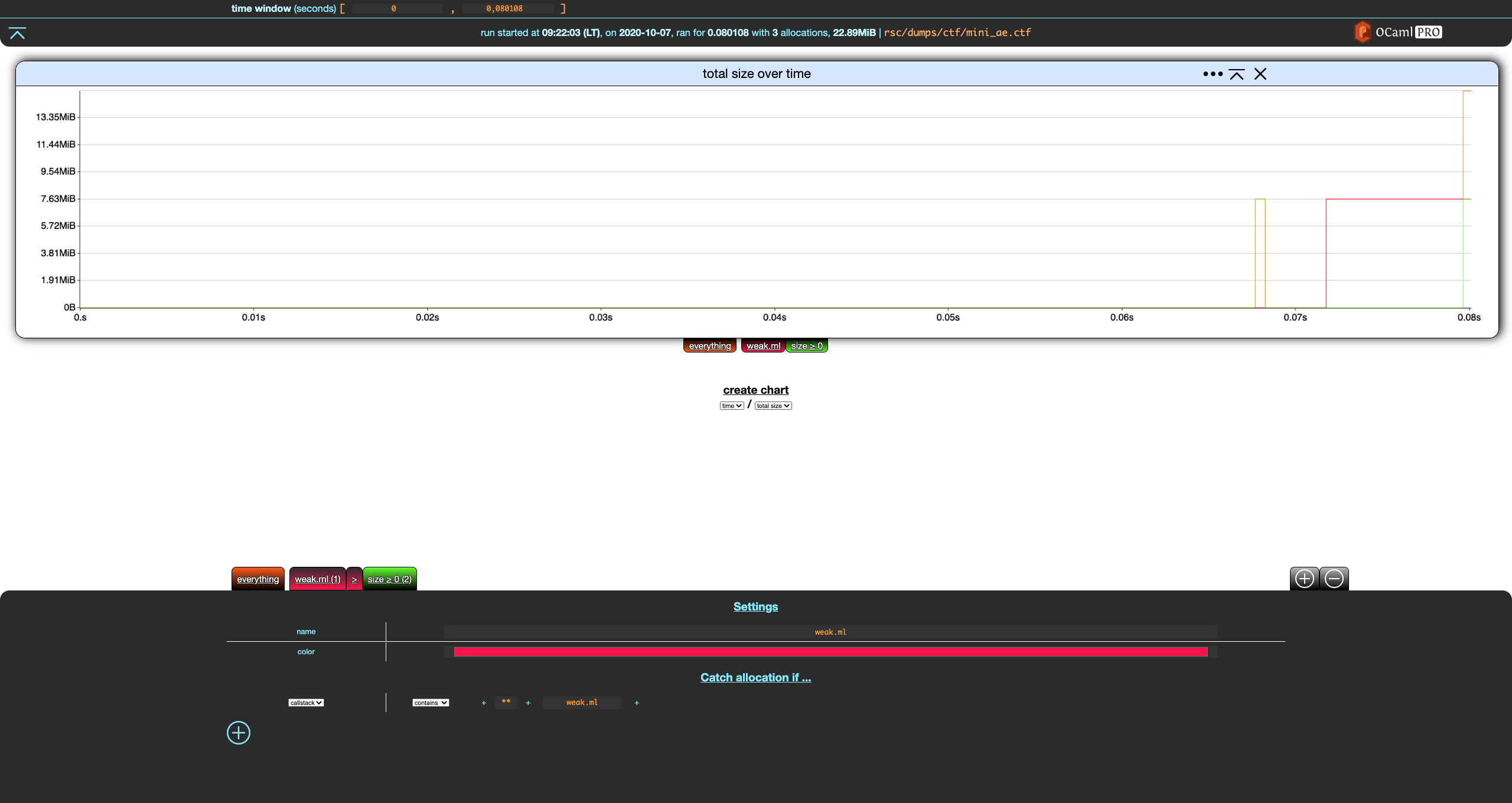 You can remove a filter by selecting it and clicking the - remove button in the top-right part of the footer, next to the + add filter button. This only works for custom filters, you cannot remove built-in filters.

Now, remove the first filter we created (size ≥ 0), which should give you this: 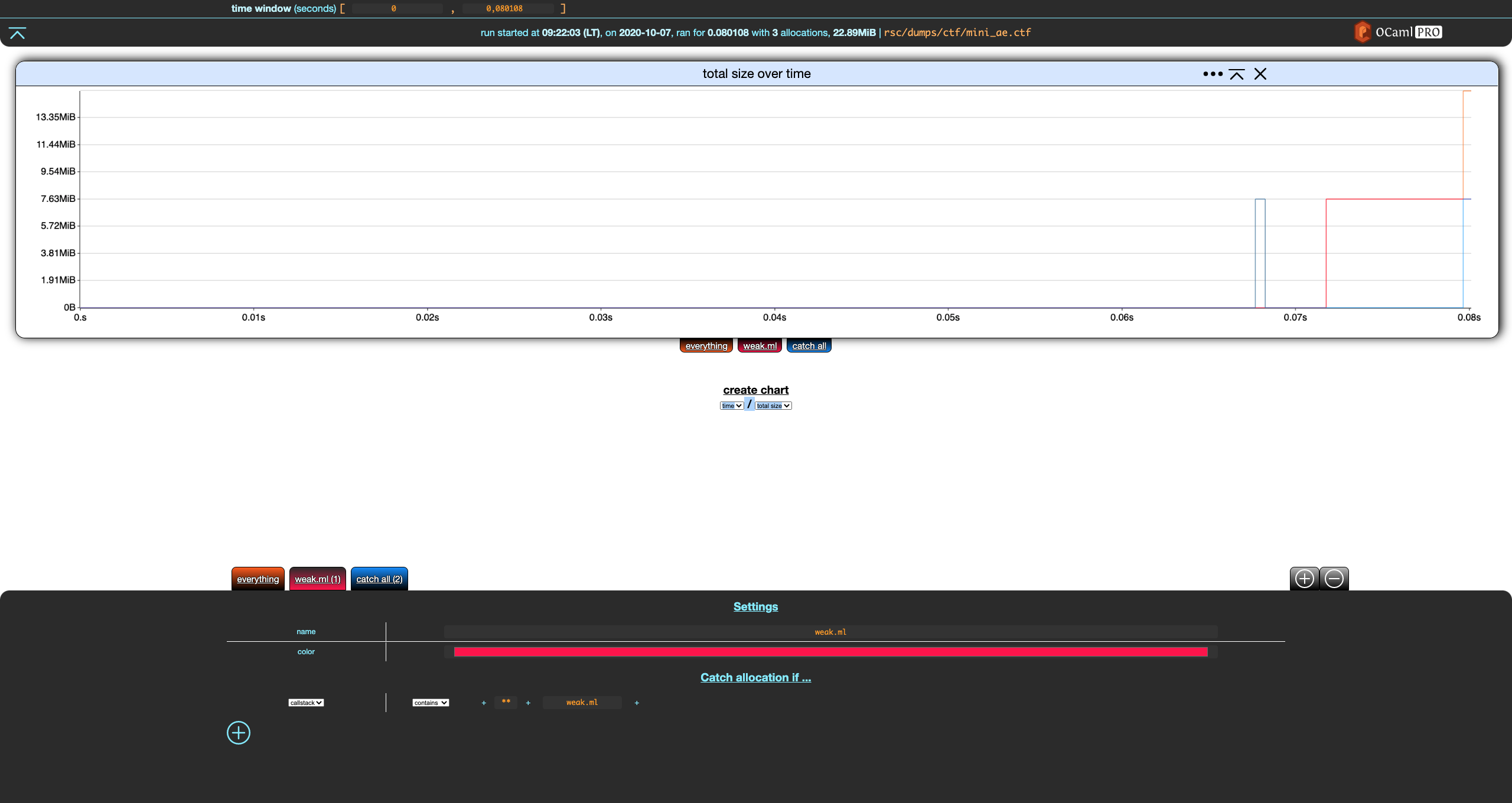 Out of nowhere, we get the second and last built-in filter: catch-all. When some allocations are not caught by any of your filters, they will end up in this filter. Catch-all is not visible when it does not catch any allocation, which is why it was (mostly) not visible until now. The filter we wrote previously where catching all the allocations.

In the switch/case analogy, catch-all is the else/default branch. In pattern matching, it would be a trailing wildcard _.

So, weak.ml only catches one of the three allocations: catch-all appears and indicates it matches the remaining two.

It is also possible to write filter criteria over allocations' callstacks. This is discussed in the Callstack Filters Section.

When we launched this section's running example, we passed --filter_gen none to memthol. This is because, by default, memthol will run automatic filter generation which scans allocations and generates filters. The default (and currently only) one creates one filter per allocation-site file.

If we relaunch the example without --filter_gen none

we get something like this (actual colors may vary): 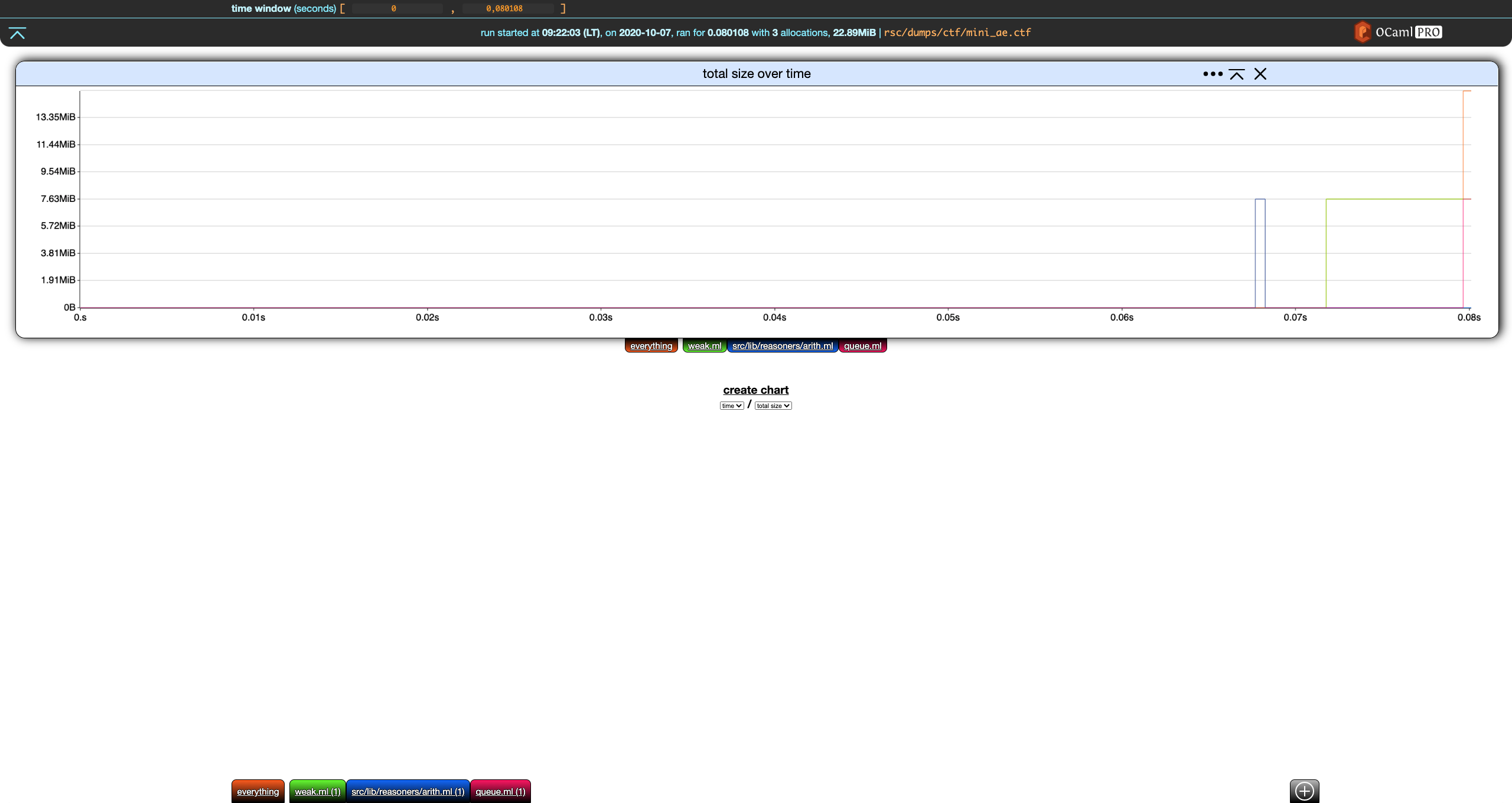 This section uses the same running example as the last section.

The first way to interact with a chart is to (de)activate filters. Each chart has its own filter tabs allowing to toggle filters on/off.

From the initial settings

click on all filters but everything to toggle them off.

Let's create a new chart. The only kind of chart that can be constructed currently is total size over time, so click on create chart below our current, lone chart. 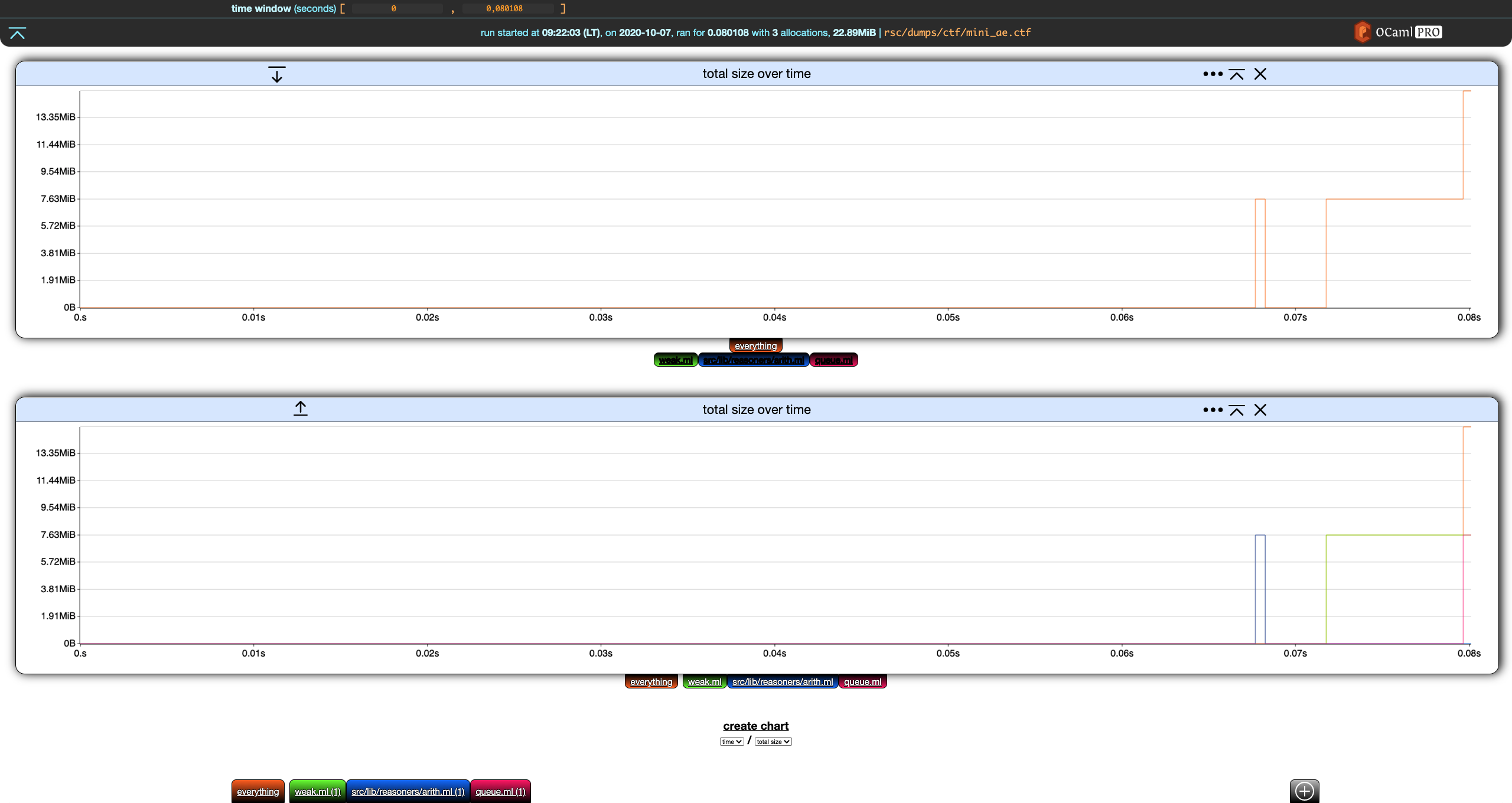 Deactivate everything in the second chart. 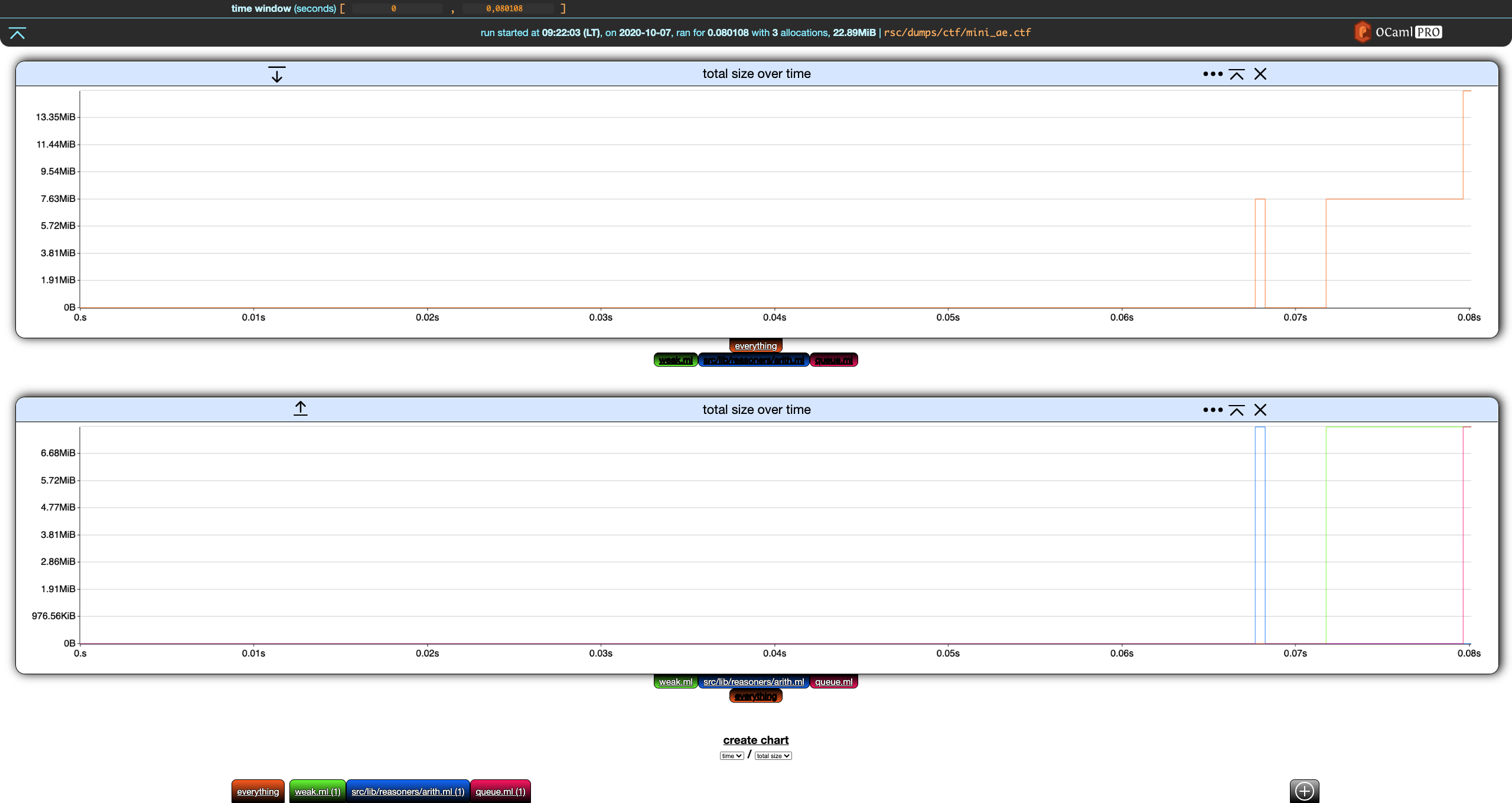 Nice. We now have the overall total size over time in the first chart, and the details for each filter in the second one.

Next, notice that both charts have, on the left of their title, a down (first chart) and up (second chart) arrow. This moves the charts up and down.

On the right of the title, we have a settings ... buttons which is discussed below. The next button collapses the chart. If we click on the collapse* button of the first chart, it collapses and the button turns into an expand button. 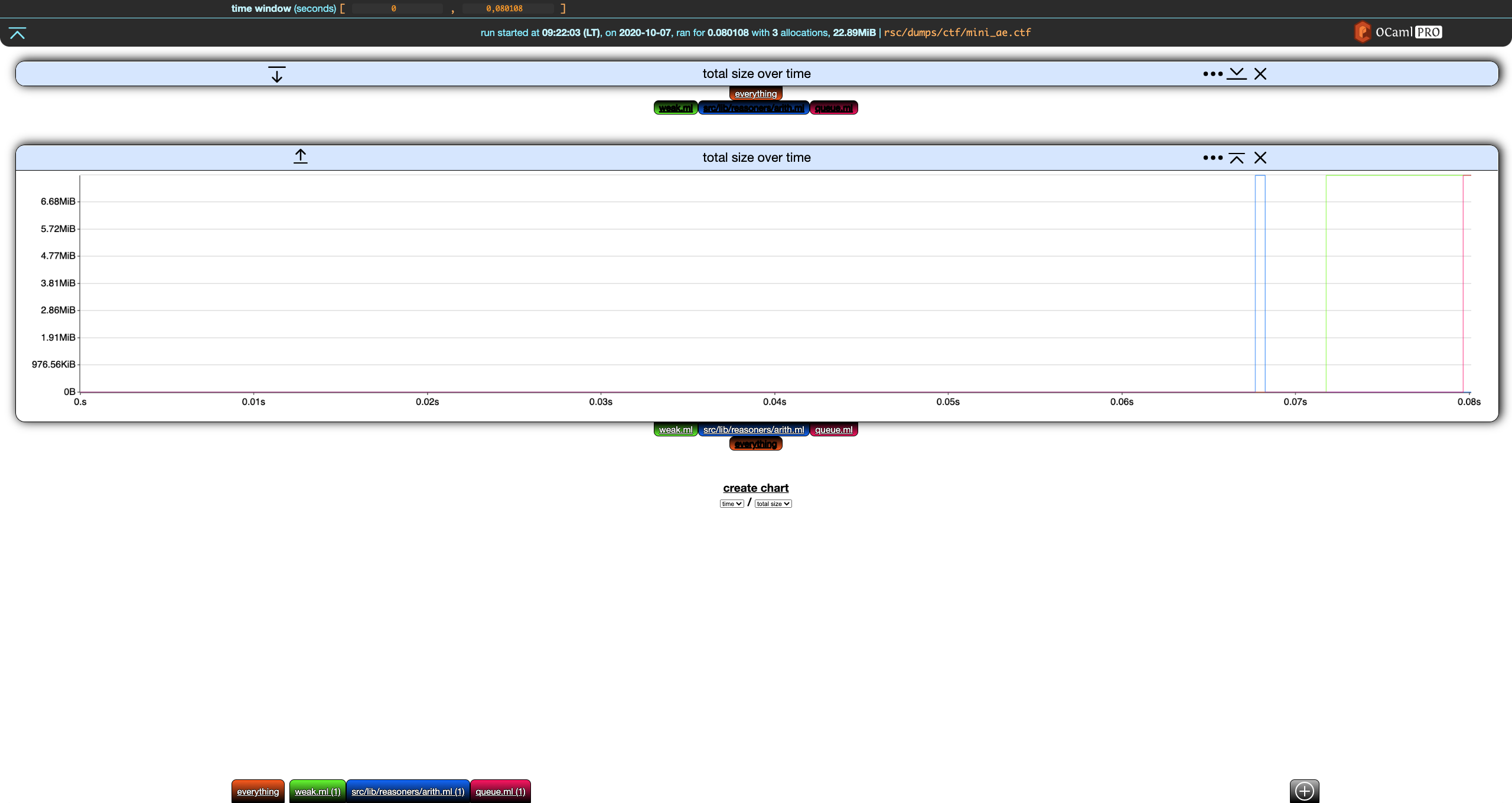 The last button in the chart header removes the chart.

Clicking the settings ... button in the header of any chart display its settings. (Clicking on the button again hides them.)

Currently, these chart settings only allow to rename the chart and change its display mode.

In memthol, a chart can be displayed in one of three ways:

Here is the second chart from our example displayed as stacked area for instance:

This section uses the same running example as the last section.

There is currently only one global setting: the time window.

The time window global setting controls the time interval displayed by all the charts. 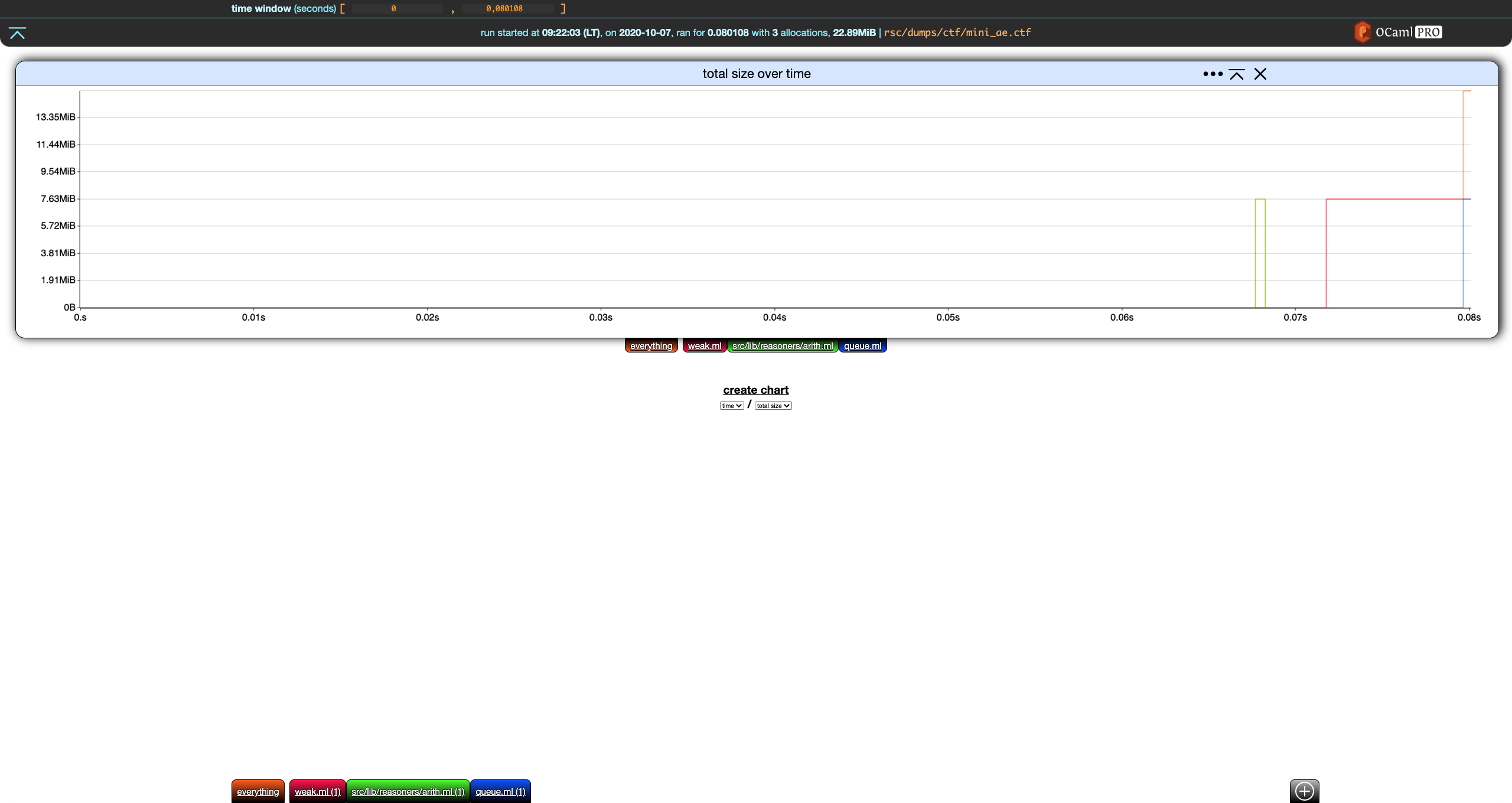 not much is happening before (roughly) 0.065 seconds. Let's have the time window start at that point:

Similar to filter edition, we can apply or cancel this change using the two buttons that appeared in the bottom-left corner of the header.

Here is the same chart but with the time window upper-bound set at 0.074.

Callstack filters are filters operating over allocation properties that are sequences of strings (potentially with some other data). Currently, this means allocation callstacks, where the strings are file names with line/column information.

A string filter can have three shapes: an actual string value, a regex, or a match anything / wildcard filter represented by the string "...". This wildcard filter is discussed in its own section below.

A string value is simply given as a value. To match precisely the string "file_name", one only needs to write file_name. So, a filter that matches precisely the list of strings [ "file_name_1", "file_name_2" ] will be written

A regex on the other hand has to be written between #" and "#. If we want the same filter as above, but want to relax the first string description to be file_name_<i> where <i> is a single digit, we write the filter as

In the first case, ... simply matches everything. Consider for instance the filter

Now, there is one case when ... is not actually lazy: when the n string-filters after it are not .... In this case, all elements of the list but the n last ones will be skipped, leaving them for the n last string filters.

does work as expected. For example, on the string list

Instead, the filter works as expected. ... discards all elements but the last one file_name_0, which is accepted by #"file_name_[0-9]"#.

Allocation callstack information is a list of tuples containing:

Currently, the range information is ignored. The line in the file is not, and one can specify a line constraint while writing a callstack filter. The normal syntax is

It can also be a range:

Whitespaces are inserted for readability but are not needed: